In this project, we will test out several supervised algorithms to accurately model individuals' income using data collected from the 1994 U.S. Census. We will then choose the best candidate algorithm from preliminary results and further optimize this algorithm to best model the data. Our goal with this implementation is to construct a model that accurately predicts whether an individual makes more than $50,000. This sort of task can arise in a non-profit setting, where organizations survive on donations. Understanding an individual's income can help a non-profit better understand how large of a donation to request, or whether or not they should reach out to begin with. While it can be difficult to determine an individual's general income bracket directly from public sources, we can infer this value from other publically available features.

The dataset for this project originates from the UCI Machine Learning Repository. The datset was donated by Ron Kohavi and Barry Becker, after being published in the article "Scaling Up the Accuracy of Naive-Bayes Classifiers: A Decision-Tree Hybrid". You can find the article by Ron Kohavi online. The data we investigate here consists of small changes to the original dataset, such as removing the 'fnlwgt' feature and records with missing or ill-formatted entries.

Let's start with importing the necessary libaries, reading in the data, and checking out the dataset.

Note that the last column from this dataset, 'income', will be our target label (whether an individual makes more than, or at most, $50,000 annually). All other columns are features about each individual in the census database.

A simple investigation of the dataset can determine how many individuals fit into either group, and tell us about the percentage of these individuals making more than $50,000.

Let's take a look at the following:

We can also visualize the relationship between different features of an individual, and their incomes.

Let's see breakdown of the counts of people earning above or below 50K based on their sex and education levels. 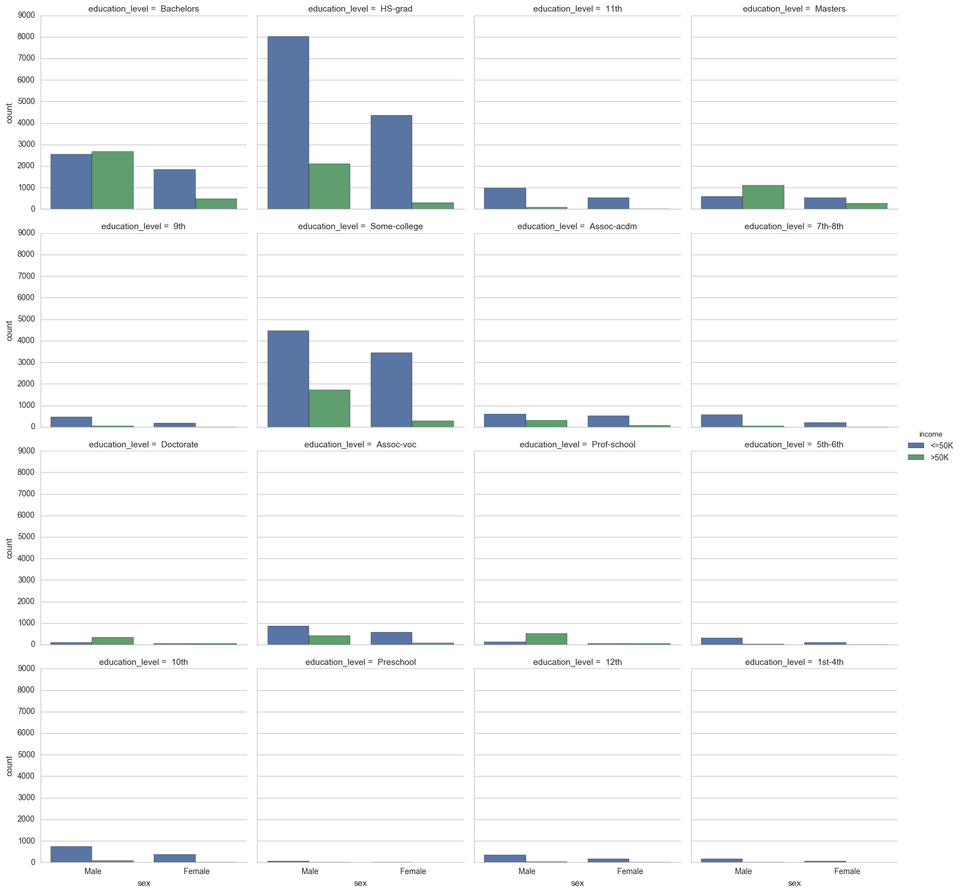 Before data can be used as input for machine learning algorithms, it often must be cleaned, formatted, and restructured — this is typically known as preprocessing. Fortunately, for this dataset, there are no invalid or missing entries we must deal with, however, there are some qualities about certain features that must be adjusted. This preprocessing can help tremendously with the outcome and predictive power of nearly all learning algorithms.

A dataset may sometimes contain at least one feature whose values tend to lie near a single number, but will also have a non-trivial number of vastly larger or smaller values than that single number. Algorithms can be sensitive to such distributions of values and can underperform if the range is not properly normalized. With the census dataset two features fit this description: 'capital-gain' and 'capital-loss'.

Let's plot a histogram of these two features and see how they are distributed.

In addition to performing transformations on features that are highly skewed, it is often good practice to perform some type of scaling on numerical features. Applying a scaling to the data does not change the shape of each feature's distribution (such as 'capital-gain' or 'capital-loss' above); however, normalization ensures that each feature is treated equally when applying supervised learners. Note that once scaling is applied, observing the data in its raw form will no longer have the same original meaning, as exampled below.

From the table in Exploring the Data above, we can see there are several features for each record that are non-numeric. Typically, learning algorithms expect input to be numeric, which requires that non-numeric features (called categorical variables) be converted. One popular way to convert categorical variables is by using the one-hot encoding scheme. One-hot encoding creates a "dummy" variable for each possible category of each non-numeric feature.

Additionally, as with the non-numeric features, we need to convert the non-numeric target label, 'income' to numerical values for the learning algorithm to work. Since there are only two possible categories for this label ("<=50K" and ">50K"), we can avoid using one-hot encoding and simply encode these two categories as 0 and 1, respectively.

In this section, we will investigate four different algorithms, and determine which is best at modeling the data.

Metrics and the Naive Predictor

In particular, when beta=0.5, more emphasis is placed on precision.

Looking at the distribution of classes (those who make at most $50,000, and those who make more), it's clear most individuals do not make more than $50,000. This can greatly affect accuracy, since we could simply say "this person does not make more than $50,000" and generally be right, without ever looking at the data! Making such a statement would be called naive, since we have not considered any information to substantiate the claim. It is always important to consider the naive prediction for your data, to help establish a benchmark for whether a model is performing well. That been said, using that prediction would be pointless: If we predicted all people made less than $50,000, CharityML would identify no one as donors.

What if we chose a model that always predicted an individual made more than $50,000, what would that model's accuracy and F-score be on this dataset?

Now we'll pick three supervised learning models above that are appropriate for this problem, and test them on the census data.

Creating a Training and Predicting Pipeline

To properly evaluate the performance of each model we've chosen, it's important that you create a training and predicting pipeline that allows you to quickly and effectively train models using various sizes of training data and perform predictions on the testing data.

Let's train and test the models on training sets of different sizes to see how it affects their runtime and predictive performance (both on the test, and training sets). 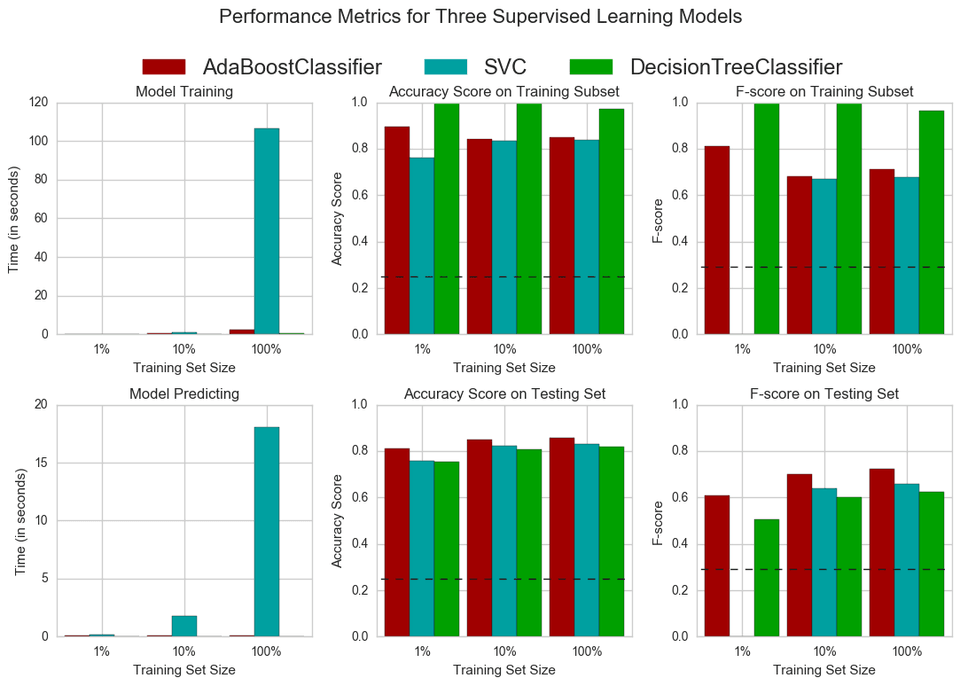 We can also print out the values in the visualizations above to examine the results in more detail.

And visualize the confusion matrix for the results. 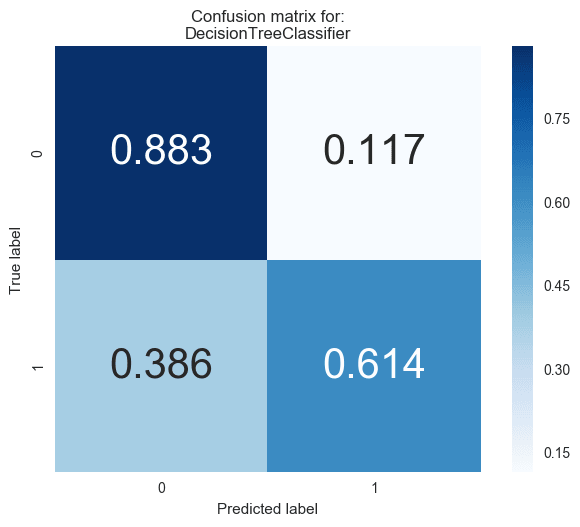 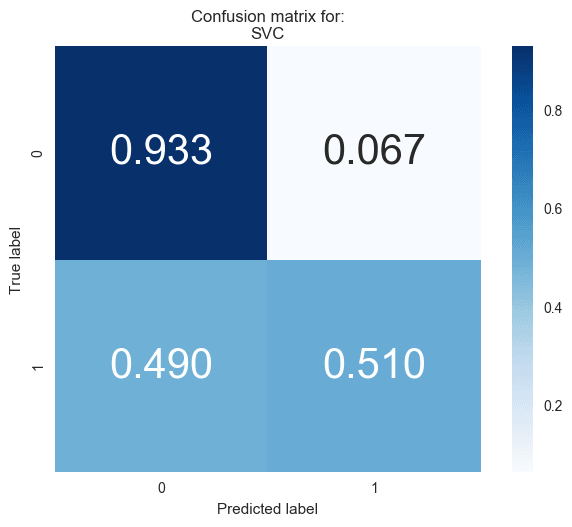 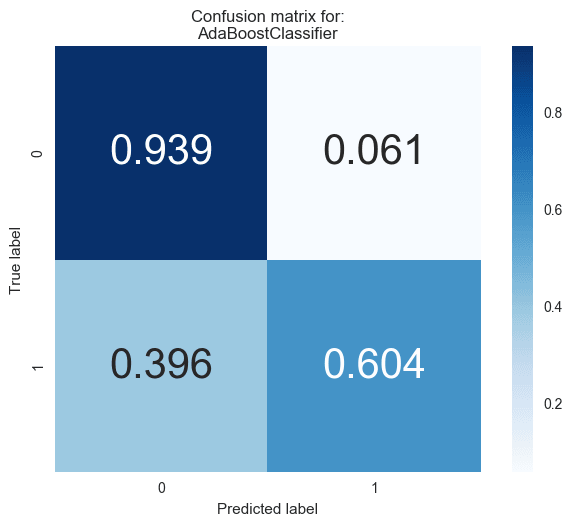 Looking at the results above, out of the three models, AdaBoost is the most appropriate for our task.

First and foremost, it is the classifier that performs the best on the testing data, in terms of both the accuracy and f-score. It also takes resonably low time to train on the full dataset, which is just a fraction of the 120 seconds taken by SVM, the next best classifier to train on the full training set. So it should scale well even if we have more data.

By default, Adaboost uses a decision stump i.e. a decision tree of depth 1 as its base classifier, which can handle categorical and numerical data. Weak learners are relatively faster to train, so the dataset size is not a problem for the algorithm.

But how does Adaboost work?

Using grid search (GridSearchCV) with different parameter/value combinations, we can tune our model for even better results.

For Adaboost, we'll tune the n_estimators and learning rate parameters, and also the base classifier paramters (remember our base classifier for the Adaboost ensemble is a Decision tree!).

An important task when performing supervised learning on a dataset like the census data we study here is determining which features provide the most predictive power. By focusing on the relationship between only a few crucial features and the target label we simplify our understanding of the phenomenon, which is most always a useful thing to do. In the case of this project, that means we wish to identify a small number of features that most strongly predict whether an individual makes at most or more than $50,000.

We know that there are thirteen available features for each individual on record in the census data. Of these thirteen records, we can guess which five features might be most important for prediction. Let's give that a go.

In my opinion, are most important for prediction are:

These are all ranked according the the impact I believe they have on a person's income. Occupation's ranked number one as different jobs have different payscales. People with higher education are more likely to earn better.

Now let's see how our algorithm ranks the features acc. to their importance. 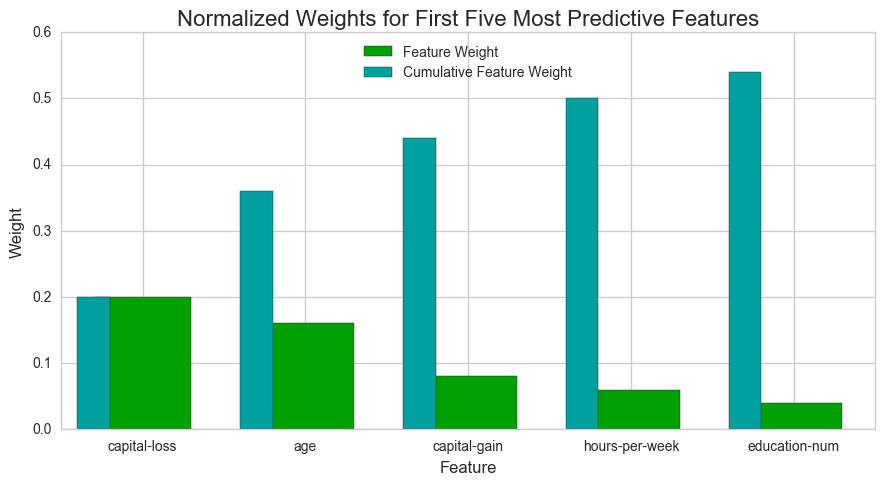 Of the five features predicted in the earlier section, 3 of them, Age, hours per week, education-num (which is a numerical label for education) are included in the list of features considered most important by Adaboost, although with different rankings.

I didn't consider two important features, capital-gain and capital-loss, partly due to my lack of understanding of what they meant. After researching what they mean (profit or loss from on the sale of assets/property), it makes sense for these features to be important. People who have earned profits from sale of assets are definitely likelier to earn higher, while those who incurred losses are likely to have had lower total income.

An interesting question here is, how does a model perform if we only use a subset of all the available features in the data? With less features required to train, the expectation is that training and prediction time is much lower — at the cost of performance metrics. From the visualization above, we see that the top five most important features contribute more than half of the importance of all features present in the data. This hints that we can attempt to reduce the feature space and simplify the information required for the model to learn.

Let's see how a model that is trained only on the selected features, performs.

On a reduced dataset, the final model's accuracy and f-score are still very comparable to the results on the full dataset.

The acccuracy is ~2.7% lower, while the f-score is ~5% lower. Even though Adaboost is relatively faster than one of the other classifiers that we tried out, I'd still consider training on the reduced data (acc. to features) if training time was a factor, and we have more training points to process. This decision will also depend on how important accuracy and f-scores are (or if f-score is more important than the accuracy, as the dip for that is larger than the dip in accuracy), to make a final decision regarding this.